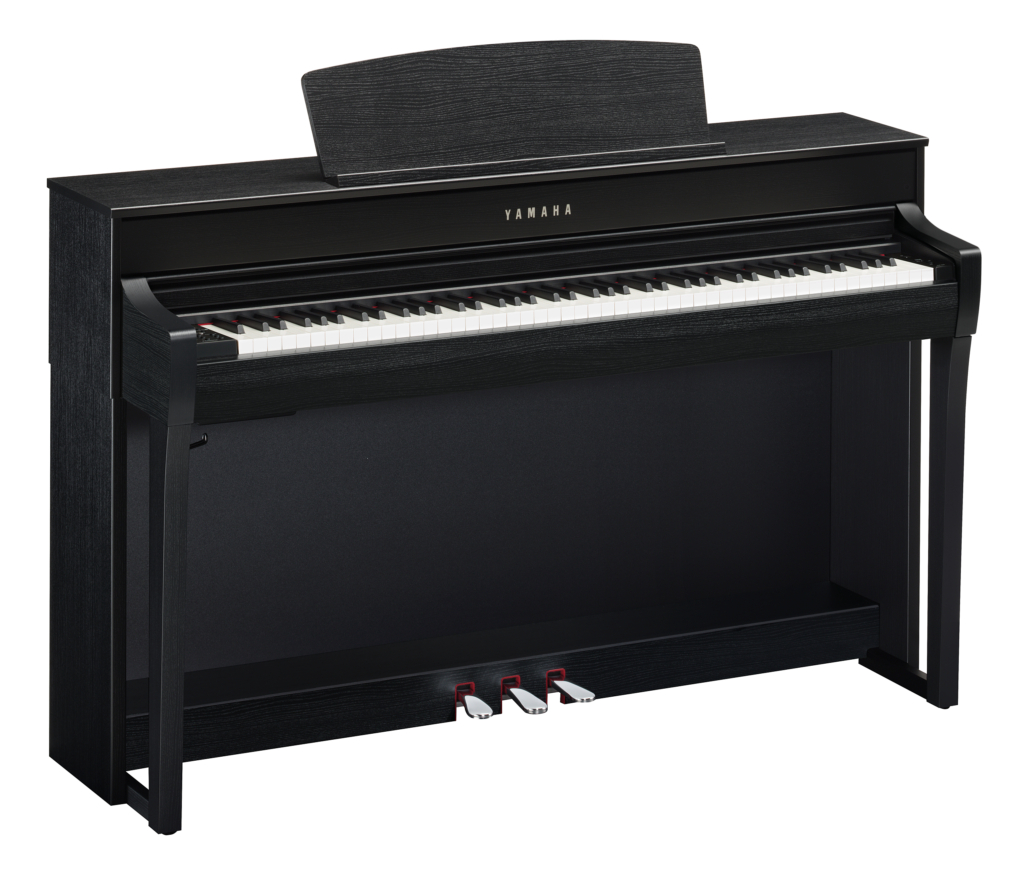 The Yamaha CLP-645 Series next-generation digital piano. Sound source recorded from a world-class Yamaha full concert grand piano. With a beautiful appearance inspired by acoustic piano cabinetry, these are digital pianos that refine everything you want, to the highest level, for enjoyable piano performance.

GrandTouch-S™ keyboard with wooden keys
Yamaha’s latest keyboard action features a broad dynamic range and faithful response to every nuance of touch that puts a wide expanse of tone—from delicate to bold—at the pianist’s fingertips. The highly consistent grand piano hammers replicate the pleasing response felt when the hammers strike the strings, enabling precise control of the tone. Highly absorbent synthetic-ivory white keys and synthetic-ebony black keys prevent slipping even during extended play and feel just like those of a grand piano.

GrandTouch-S keyboard of the CLP-745 features wooden keys that showcase Yamaha’s expertise with wood for pianos. Just as with grand piano keyboards, the solid wood is cut from the very best parts of well-dried lumber, making the keys more resistant to warping than keyboards made of laminated wood. The wooden texture and structure of the keys create a more grand piano-like feel.

Escapement mechanism of Clavinova keyboards
The escapement mechanism in a grand piano moves the hammers away from the strings quickly after they strike them, in order to prevent any interference with string vibration. This mechanism produces a slight clicking sensation when the keys are pressed gently.

The Clavinova keyboards feature an escapement mechanism that reproduces this sensation near the bottom of the key dip. They have been designed in such a way that the click is discernible only on the lightest keystrokes, similar to the keyboard of a grand piano. These keyboards have been adjusted to provide additional friction that balances key repetition and response without impeding performance.

Yamaha Clavinova CLP
Design philosophy
Clavinova pianos boast excellent playability and versatile functions, along with a refined, authentic design that blends a compact form with modern aesthetics in a manner befitting the instrument that sets the contemporary standard for pianos. At the heart of the Clavinova design concept is the way the player feels when they take their seat in front of a Clavinova piano. Unnecessary elements are removed from the player’s field of vision to create a convincingly natural space that feels just like sitting at an acoustic piano. This represents Yamaha’s consideration to players who practice on Clavinova and perform on grand pianos—they are able to take the stage free of tension or worry because everything feels normal, as it should. A Clavinova piano is a part of the player’s everyday life—contemporary accents and color variation are available to mesh with any interior design or lifestyle.

Sensitivity
Yamaha Clavinova CLP
Grand Expression Modeling
The interaction and interplay of the hammers, dampers, and strings inside a grand piano respond to the subtlest nuances of the pianist’s touch, creating a limitless range of tonal expression. Touch refers to the pianist’s control, not only of intensity (softness/loudness) in playing and releasing the keys, but also of the speed and depth with which the keys are pressed. The Grand Expression Modeling introduced in the CLP-700 Series translates the widely varied input from the pianist’s fingers into the same limitless tonal variation of a grand piano.

This makes it possible to vary the output by playing the keys to different depths and with different speeds, even when using techniques such as trills or legato or emphasizing the melody over the accompaniment. Grand Expression Modeling excels at faithfully reproducing the output expected of these techniques in many well-known songs. In Debussy’s “Clair de Lune,” a loose touch creates the faint tone that makes the melody stand out more crisply. In Liszt’s “Un Sospiro,” the accompanying arpeggios accent the melody without overwhelming it, and varied expression of the melody gives it the same quality as vocals. In the last of the Chopin nocturnes, trills, legato, and other delicate techniques where fingers seem to float over the keys deliver the airy, smooth tonal expression required. Playing such pieces on a highly expressive piano helps the pianist learn various techniques and experience the same joy of expression as a painter, but through sound.

Yamaha Clavinova CLP
Newly sampled Yamaha CFX and Bösendorfer Imperial voices
Clavinova grand piano sounds are recorded from several world-renowned concert grand pianos. One of them is the CFX, Yamaha’s top-flight concert grand piano. Pianists around the world are enamored with the impressive, dazzling, richly expressive sound of the CFX in concert halls. Another sampled concert grand is the Imperial, the flagship model of Bösendorfer, a time-honored Viennese piano brand with an ardent following. The Imperial is known for its abundance of color and natural, warm feeling. Yamaha faithfully reproduces the idiosyncrasies of these concert grand pianos by carefully recording the entire tonal range of each of the 88 keys, making minute adjustments to capture the most harmonious tones each piano has to offer.

One of the allures of the grand piano is the sympathetic resonance created by the vibration of the entire instrument. Clavinova pianos elaborately reproduce this rich sympathetic resonance through a groundbreaking technology called Virtual Resonance Modeling (VRM). VRM creates a richly varied sound by simulating the complex sympathetic tones created when the vibrations of the strings are propagated to the soundboard and other strings, corresponding to the timing and intensity of key playing and pedaling. CLP-700 Series pianos even replicate the sounds the dampers make when they are raised off the strings, in addition to the resonance of the duplex scaling, strings, soundboard, and case. Clavinova pianos allow you to enjoy the same momentary dynamics and deep sympathetic sounds that are produced by the entire body of a grand piano.

Yamaha Clavinova CLP
A fully immersive concert grand experience—even with headphones
Binaural sampling is a method of sampling in which special microphones are placed on a mannequin’s head in the same positions as the pianist’s ears to capture piano sounds the way that they sound in reality.

We chose this method to create the ambience and full, natural resonance of acoustic pianos in Clavinova pianos. This makes pianists feel as though they are sitting at a grand piano even when they play with headphones on. The experience is so pleasant that they forget they are wearing headphones, no matter how long they continue to play.

On CLP-700 Series pianos, binaural sampling was used for the Bösendorfer Imperial as well as the Yamaha CFX. Yamaha achieves higher-definition binaural sound with a specially developed mannequin head and model ears used for the recording.

Period instrument voices open the door to the world of classical music
The CLP-775/745/735/765GP* are Yamaha’s first instruments to be equipped with the voices of the fortepiano, the predecessor to the modern piano. The sounds emitted by a fortepiano are simpler than those of a modern piano, and decay much more rapidly. Hearing the sounds of the instruments played when the likes of Mozart, Beethoven, and Chopin were composing their songs should illuminate the original intent behind the notes on the page. Here is a novel opportunity to communicate with historical composers by playing these period instruments.

*These models are equipped with the voices of two fortepianos beloved by Mozart and Chopin.

The fortepianos shown in the picture are from the collections of at the Hamamatsu Museum of Musical Instruments.

Time-tested practice aids
Train your hands with some of the most widely accepted exercises in the world using proven practice methods from Hanon, Bayer, Czerny and Burgmüller. You can use these built-in songs for practicing with your right and left hands separately, or simply enjoy listening to them.

Playing the piano along with rhythm playback
The CLP-700 Series comes complete with 20 different and simple rhythm patterns (drums and bass accompaniment) that are perfectly suited to many types of music, letting you spice up your performance with some backing musicians, make practice more interesting, or open up your creative flow with inspiring new ideas.

Connect wirelessly for Bluetooth® audio
You can play music through the audio system on the Clavinova* by using a Bluetooth-enabled smart device. You can stream audio data such as mp3 files. You can enjoy playing along with any songs on your smart device.

Yamaha Clavinova CLP
Get more with the Smart Pianist app
Enjoy the piano more with Smart Pianist, a dedicated app that adds a beautiful graphic interface and a variety of incredible features to your compatible Yamaha digital piano.

Learn more about Smart Pianist app
Multi-track Song Recorder
The recording function featured in Clavinova digital pianos allows you to record your performances* with a single touch, which is useful when you want to review your playing objectively. Additionally, you can record up to 16 tracks for simultaneous playback, so different hands can be recorded separately or overdub parts with different voices.

*Recordings are made in MIDI format, and can also be recorded to USB flash memory. Compatible software is required for playback of recorded data on a computer.

USB Audio Recorder
Record performances to USB flash memory and create audio files* you can save and play back on a computer, share with friends or create a CD.

Back to: YAMAHA DIGITAL PIANOS