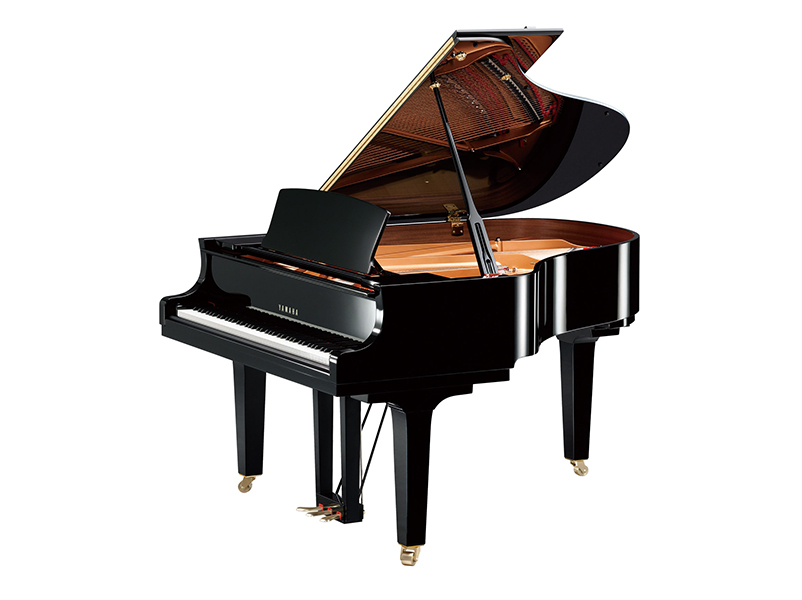 Yamaha C2X – 5’8″ Ebony Polished. The legacy of the CFX continues Preserving tradition is not the same thing as refusing to change;rather, it is from the ongoing search for perfection that traditions emerge.

The legacy of the CFX continues.
Preserving tradition is not the same thing as refusing to change;rather, it is from the ongoing search for perfection that traditions emerge. And when it comes to the tradition of crafting a grand piano, there is a sound, a tone to which only those who strive constantly to outdo themselves can aspire. For almost half a century, Yamaha’s world-renowned C Series grand pianos have continued through a gradual process of refinement The CFX full concert grand piano built on the knowledge, techniques, and experience gained during this long period, with craftsmen pouring everything they knew into the creation of an instrument that took bold new steps in piano design, seeking to attain sonic perfection. The CX Series extends this work further, providing a clear sound with a clean attack, sparkling tone, and transparent harmonies, all encased in an elegant, flowing form. The end result is a series of instruments that is refined in tone, yet bold in design, the product of a dedication to innovation that allows Yamaha to remain true to its musical heritage. CX Series pianos represent progress that is commensurate with Yamaha’s 125th anniversary year – progress that will transform any room in which you play into a concert hall.

CX Series pianos feature a thickened back frame for improved support, providing a rich, resonant tone.
One of the most important factors in achieving a rich tone is the support provided within the instrument. When playing powerful fortissimo the force exerted on the instrument causes it to bend slightly, losing energy. The part of the piano that accepts this force and transforms it into deep reverberation is called the back frame, which could be likened to the skeleton in a human body. On the C3X for example, this back frame is approximately 20% thicker than on other pianos, providing significantly improved support, and reflecting the considerations on which the CX Series has been completely redesigned.

The new soundboard resonates with the emotions of the performer.
A violin is built around a beautiful body with three-dimensional swellings and a delicately curved shape, which is similar to the three dimensional concave design in a piano soundboard called the “crown.” The manufacture of this crown is pivotal to the crafting of any piano, and is thus of paramount importance to piano engineers in addressing the problem of how to transmit the vibrations of the strings from the soundboard into the surrounding air efficiently. Yamaha has taken experience accumulated through many years of crafting pianos and combined it with unsurpassed engineering ability to ensure that the soundboard always provides superb projection. The resulting design capitalizes on physical phenomena unique to the craft of piano-making, to create a soundboard assembly with a structure that allows it to vibrate easily, something that would not have been possible without the deep understanding of the traditional art of piano crafting that goes hand-in-hand with Yamaha’s experience and engineering know-how. The same techniques developed for gluing the soundboard, ribs, and bridge in the CFX are used for the C3X and above—models which require a great deal of projection—and the process of installing the resulting soundboard assembly into the piano body has been investigated carefully. This has resulted in dramatically improved projection and the unprecedented response that performers demand.

Revolutionary new music wire offers beautiful sustain and harmony.
It is music wire that actually creates sound of a piano. While affected by its matching with the hammers, soundboard and body of the piano, music wire has a profound effect on the timbre and sustain of the instrument. The CX Series utilizes music wire that produces a rich sound with a full complexity of overtones in its middle and upper registers. Coupled with the support from a solid foundation, this gives CX Series pianos a rich, harmonic sound.

Expertise in frame making shines through in robust quality.
The frame in a modern piano must be able to withstand a total string tension in excess of twenty tons; not only does the frame work together with the wooden body to support the string tension, but it has a profound effect on the instrument’s sound. Yamaha makes its own frames, relying on a method of casting referred to as the “vacuum process,” developed over many years to create some of the best piano frames in the world. During this time we have built up a storehouse of knowledge on factors such as the manner in which controlling the temperature and composition of casting, and even the coating used on the frame itself, affects the acoustic characteristics of the piano. This is a major reason that Yamaha is able to ensure reliable quality when crafting our pianos.

A design that unifies piano with pianist, inheriting the legacy of the CF series.
CX Series pianos feature a completely revamped design. Following in the footsteps of the CF Series concert grand, the CX Series design features simple, elegant lines, focusing on the characteristic legs of the piano in doing away with any excess ornamentation. This elegance is set off by a solid pedal box that allows performers to depress the pedals with as much power as they want, one aspect of a philosophy epitomizing “functional design” that allows pianists to become one with their instrument as they play. In order to provide the best playability possible, CX Series grand pianos offer white keys made of Ivorite™, which has a feel, color, and absorbency very similar to natural ivory, while natural ebony has been used for the black keys.

Back to: YAMAHA GRAND PIANOS