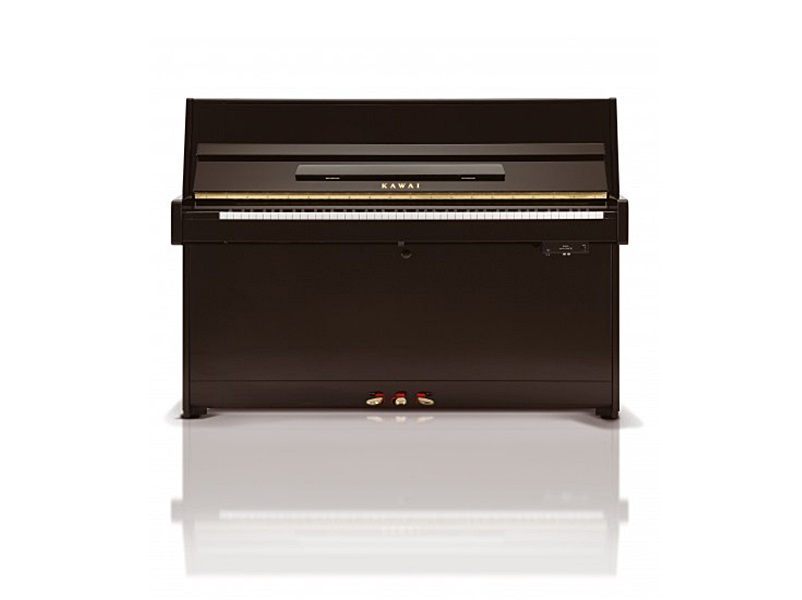 The AnyTimeX3 control box is placed below the keybed. Digital operation greatly extends the capabilities of the AnyTimeX3 piano beyond that of a traditional acoustic instrument, with convenient transpose and tuning facilities, a metronome and a selection of high fidelity sounds suitable for various musical occasions. Dual headphone sockets provide greater flexibility for academic institutions, while other connectors allow a range of creative music-making opportunities.

When playing a fine piano, the amount of pressure applied to the keyboard affects not only the volume of the sound produced, but also the unique tonal character of each note. Therefore, in order to construct realistic acoustic portraits of the SK-EX and EX concert grand pianos, not only is each key recorded individually, but also at various different volume levels, ranging from gentle pianissimo to thunderous fortissimo. The new K-15 ATX3L offers a highly detailed acoustic portrait, employing Kawai’s unique Progressive Harmonic Imaging sampling technology to ensure smooth tonal transitions across the keyboard and throughout the entire dynamic range.

The beautiful sound of the Kawai SK-EX and EX concert grand pianos is at the heart of the new K-15 ATX3L, with all eighty-eight keys of these world-class instruments painstakingly recorded, meticulously analysed, and accurately reproduced as high-fidelity digital waveforms.

Recording each key individually in this way – as opposed to stretching the same tone over several different notes – preserves the rich harmonic character of the SK-EX and EX concert grand piano, and guarantees that the sound heard when playing any key is a faithful representation of the original acoustic source.

The AnytimeX3 models showcase a variety of grand piano sounds that are suitable for a wide range of musical periods and styles.

The Variety of a Digital Piano

Supplementing the beautiful acoustic piano voices, the AnytimeX3 models also feature an excellent selection of additional sounds, ranging from electric piano and drawbar or church organ, to strings, and other instruments, inviting musicians to add variety to their performances. The depth of a performance can then be transformed using the reverb features, allowing pianists to position themselves within one of six acoustic environments, ranging from a small practise room to an inspirational grand cathedral.

The AnytimeX3 models are equipped with a power saving feature which turns off the piano automatically after a specified period of inactivity.