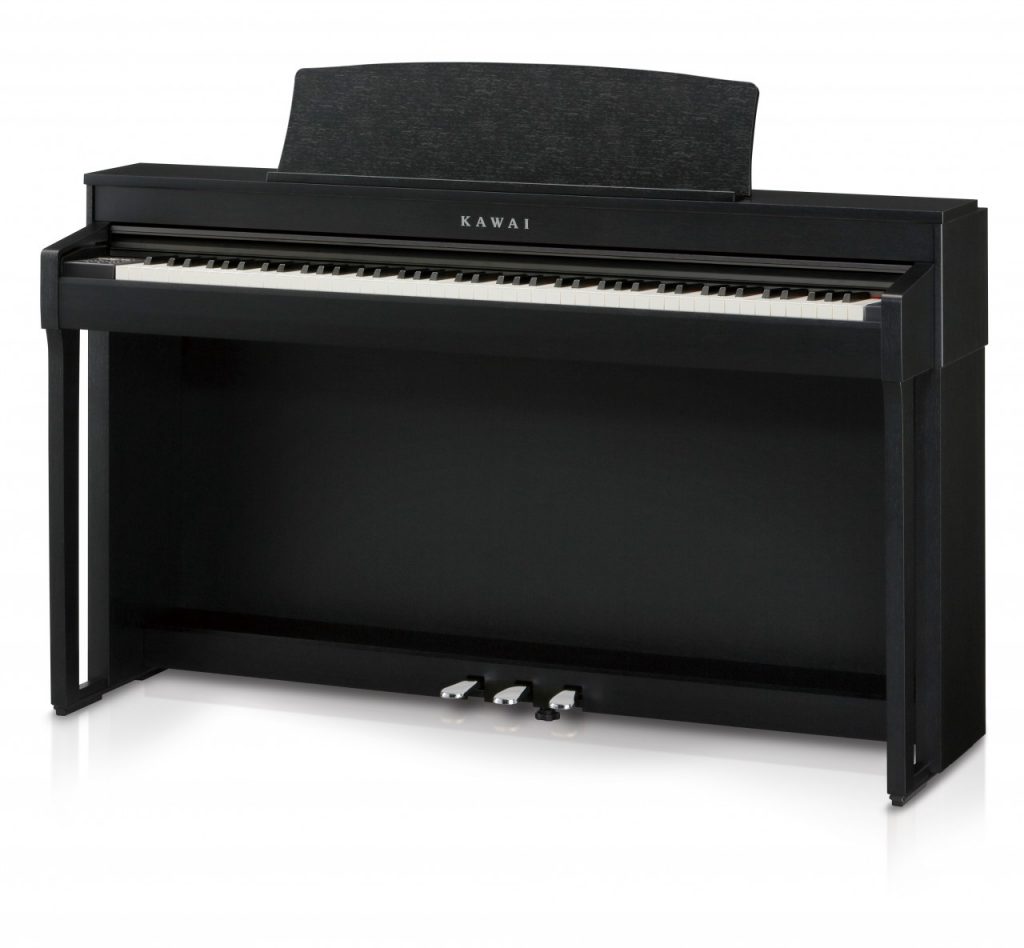 These realistic piano sounds are delivered using high-performance audio hardware and speaker systems, with the class-leading CN301 boasting four speakers and new diffuser panels that help to expand the instrument’s tonal projection in all directions. This technology is complemented by a newly engineered power adapter that contributes to an overall smoother, clearer sound, and ensures a faithful reproduction of the acoustic piano source – even when playing at high volume levels.

Connecting the CN301’ stunning grand piano sounds to the player is the acclaimed Responsive Hammer III keyboard. This highly-regarded action features graded hammers that replicate the heavier bass and lighter treble hammers of an acoustic piano, with additional counterweights embedded within the front of each black and white key that assist playing control during pianissimo passages. The CN301 utilises a modern triple sensor key detection system for enhanced repetition speed and responsiveness, allowing a greater range of expressive control from staccato to legato playing.
The Responsive Hammer III action is equipped with premium Ivory Touch key surfaces that possess an attractive, natural matte finish that is smooth but not slippery, while let-off simulation reproduces the subtle resistance felt when playing the keys of a grand piano very softly, satisfying the expectations of the most experienced pianists. Finally, the updated RHIII action utilised by the CN301 model features structure and cushioning upgrades. These enhancements further improve the sense of stability when keys are pressed, while also helping to reduce action noise as the keys are released.

The impressive CN301 offers a variety of useful features to complement their stunning grand piano sounds and authentic keyboard touch. Integrated Bluetooth® MIDI and Bluetooth® Audio connectivity allows apps such as Kawai’s dedicated PianoRemote control app, or a wide range of third-party learning and recreation apps to be enjoyed wirelessly, and for music streamed from a smartphone or tablet to be played through the pianos’ impressive audio systems without any additional cables.
For aspiring pianists, the built-in lesson function featuring a variety of classical etudes is complemented by Kawai’s PiaBookPlayer score viewing app, while the adjustable metronome and song recorder are both invaluable tools for developing a sense of rhythm and charting one’s progress. An assortment of additional instrumental voices, along with Dual and Split playing modes add greater variety to players’ performances, while the special Four Hands mode divides the keyboard into two independent sections, allowing teacher and student to practise and play together using a single instrument. The CN301 also inherit Kawai’s advanced SHS technology from the larger CA Series instruments, enhancing the depth and realism of sounds heard through headphones or earphones, while also helping to reduce auditory fatigue when listening for extended periods of time.

The CN301 raises the bar further, with additional recorder function that allow MP3 or WAV audio files to be recorded and to a USB memory device directly on the instrument, and then shared with friends and family online. Both CN Series models include USB-MIDI ports for straightforward wired connectivity with computers, while the CN301 also offers stereo Line In and Line Out jacks that allow the instrument to be enjoyed in larger settings such as churches or school halls.

The CN301 piano is housed within a premium quality wooden cabinet that incorporate a flat fascia and raised upper board. The control panel for both models is discretely embedded inside the left cheek-block, with functions clearly printed directly onto each button, and high-resolution OLED displays that remain clear and easily readable from the seated position. Attractive curved leg and minimalist toe block design contributes to the pianos’ slender appearance, with Premium Rosewood, Satin Black, and Satin White finishes that are suitable for a range of traditional and modern interiors.
Beautiful grand piano sounds, an authentic keyboard action, and a variety of modern, convenient features – all housed within an attractive and inspiring cabinet.

The Touch of a Grand Piano
The new CN Series’ class-leading Responsive Hammer III keyboard action recreates the supreme touch of an acoustic grand piano, with its realistic movement and rigid, springless design providing a smooth and natural piano playing experience. The instruments’ triple-sensor key detection system enhances responsiveness and accuracy, while structural reinforcements throughout the action assembly help to minimise noise and key wobble during staccato and fortissimo passages.
The weight of the keyboard is appropriately graded to mirror the heavier bass hammers and lighter treble hammers of an acoustic piano, whilelet-offsimulation recreates the subtle ‘notch’ sensation felt when softly playing the keys of a grand piano. These important characteristics allow discerning pianists to practise their expanding repertoire with confidence, and ensure that there are no unpleasant surprises when called upon to perform using the finest acoustic grand pianos.

Authentic Counterweights
In addition to grade-weighted hammers, the RHIII keyboard action also features counterweights placed within each key. As with an acoustic piano, these finely balanced weights help to lighten the touch of the keyboard during pianissimo passages, while adding a feel of greater substance when playing with force.

Triple-sensor key detection
Complementing the grand piano-like keyboard touch, the Responsive Hammer III action also features a new triple-sensor key detection system for enhanced playing realism. The third sensor improves responsiveness when playing the same key repeatedly, and also allows the sound of a single note to be gradually ‘layered’ without the previous tone being lost. In addition, improvements to the CN Series’ sound hardware also permit the speed at which keys are lifted to influence the release character of piano sounds, providing a greater range of expressive detail between staccato and legato playing.

The Sound of a Grand Piano: Two world-class instruments
Earning a reputation as the ‘premier piano of Japan,’ it graces the stages of concert halls and musical institutions around the globe, receiving universal acclaim for its exceptional clarity and dynamic range.
The CN39 captures the magnificent tone of the flagship Shigeru Kawai SK-EX concert grand piano. This peerless instrument is hand-built by Master Piano Artisans at the Shigeru Kawai Piano Research Laboratory in Ryuyo, Japan, and widely regarded as one of the finest instruments in its class.
In addition, the CN39 also features the distinctive sound of Kawai’s highly acclaimed EX concert grand piano, which has been selected by professional pianists in such prestigious events as the Chopin, Tchaikovsky, and Rubinstein international piano competitions, among others.

Full 88-key stereo piano sampling
The rich, expressive sound of the SK-EX and EX concert grand pianos is the heart of the CN39, with all eighty-eight keys of these world-class instruments painstakingly recorded, meticulously analysed, and accurately reproduced as high-fidelity digital waveforms. Earning a reputation as the ‘premier piano of Japan,’ it graces the stages of concert halls and musical institutions around the globe, receiving universal acclaim for its exceptional clarity and dynamic range.
Recording each key individually in this way preserves the grand pianos’ unique harmonic character, and guarantees that the sound heard when CN39’s weighted keys is a faithful representation of the original acoustic source.

Harmonic Imaging technology
When playing a fine piano, the amount of pressure applied to the keyboard affects not only the volume of the sound produced, but also the unique tonal character of each note. Therefore, in order to construct a realistic acoustic portrait of the SK-EX and EX concert grand pianos, not only is each key recorded individually, but also at a wide variety of different volume levels, ranging from pianissimo to fortissimo. The CN39 offers a highly detailed acoustic portrait, employing Kawai’s proprietary Progressive Harmonic Imaging sampling technology to ensure smooth tonal transitions across the keyboard and throughout the entire dynamic range.

Personalised piano adjustments
The knowledge and skill of an experienced piano technician is essential to bring out the best of a fine acoustic piano. In addition to tuning each note, the technician also performs numerous regulation and voicing adjustments that allow the instrument to truly sing.
The CN39’s powerful Virtual technician function simulates these refinements digitally, allowing performers to shape various aspects of the piano’s tonal character and playability to suit their unique personal preferences. Perform touch weight and voicing adjustments, regulate hammer and key release noises, and fine-tube string, damper, and cabinet resonances. It is even possible to adjust the precise tuning, volume, and character of individual notes – all in real-time.

Superior 4-speaker output system
Unrivaled in its price range, the CN39 features an impressive 4-way system designed to reproduce the harmonic spectrum of an acoustic piano. Lower range frequencies are delivered through the underside of the instrument, while mid and high frequencies are projected outward via top-mounted speakers, closely mirroring the sound projection of a grand piano.

Bluetooth® connectivity
In addition to standard USB and MIDI ports, the new CN37 also boasts integrated Bluetooth MIDI technology, allowing the digital piano to communicate with supported smart devices wirelessly.
Once paired with a phone, tablet, or laptop, CN Series owners can easily expand the instruments’ functionality with a wide range of education, performance, and scoring apps. A dedicated Kawai Virtual Technician control app is also freely available, providing an enjoyable way to learn about and adjust various acoustic piano characteristics from an attractive touch interface, without the need for additional adaptors or cables.

Improved headphone experience
The CN39’s Spatial Headphone Sound (SHS) technology enhances the depth and realism of the instrument’s various sounds when using headphones or earphones, while also helping to reduce auditory fatigue when listening for extended periods of time.

USB record & playback
With an impressive selection of GM2 instrument sounds and drum kits, and 256 note polyphony, the CN37 is capable of playing and recording multi-track SMF (Standard MIDI Format) files from USB memory devices with stunning realism and musicality.
This USB to Device functionality can also be used to play back MP3 or WAV audio files, allowing musicians to accompany their favourite artists, play along to professional ‘minus one’ backing tracks, or simply learn the chords for a new piece. It’s even possible to record or overdub performances directly to USB memory as MP3/WAV audio files for emailing to family and friends, or casual listening away from the piano.

Inspirational playing modes
The CN39 built-in lesson function allows aspiring pianists to learn piano with classical Czerny, Burgmüller, and Beyer etudes, or a collection of songs from the popular Alfred course books. In addition, the instruments’ Dual, Split, and Four Hands playing modes allow two different sounds to be layered together, or for the entire keyboard to be split into two separate sections for duet performances.

Adjustable music rest
As with a grand piano, the viewing angle of the CN39’s music rest can be adjusted to suit the performer’s playing position, or laid flat for convenience when notating scores.

Authentic pedal response
Reinforcing the CN39’s reputation as the most realistic digital pianos in its price range is Kawai’s Grand Feel Pedal System. This development accurately replicates the position and individual weighting of the damper, soft, and sostenuto pedals of a Shigeru Kawai SK-EX concert grand piano to further enhance playing authenticity.

Back to: KAWAI DIGITAL PIANOS